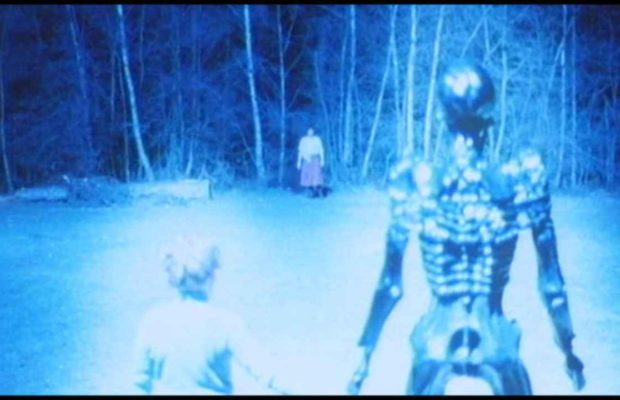 It’s already been years since Xtro 4 was first teased by Harry Bromley-Davenport, director of the original three Xtro films. And in all that time there’s been no news at all – I honestly believed it would never come to fruition. But I recently discovered an interview Fandom conducted last October with Xtro producer Mark Forstater. And he updated on Xtro 4 in almost every way possible – with more information than I could’ve dreamed of.

Forstater began by revealing the film’s title and what sets the plot in motion.

“We have a script. Xtro: The Big One. Which is about an earthquake, a big earthquake that devastates Los Angeles. It’s caused by an alien spaceship which has been buried in the desert outside LA for millennia and it [happens] when it rises up, this earthquake. It’s about a group of teenagers and their parents who are trying to get to safety in the midst of this really strange, let’s say what Donald Trump would call ‘carnage’ taking place in Los Angeles. In fact, maybe we should call this film Xtro: Carnage.”

He also explained the film will be bigger than any Xtro before it – pushing the boundaries of being a horror/sci-fi film and crossing into new territory.

“We have some really good scenes. Now we know what ‘Xtro’ is. Xtro needs weirdness, so we’ve got a few things that are very, very strange but we’re also trying to tell a human story, a personal story. I think we can do it better than the original because we all have a lot more experience making films. So, I think Xtro 4 will be, should be, a film that could go beyond the sci-fi and horror audience and really be a crossover film. That’s what we’d like to see happen. Not just make some small movie, because you really can’t make an earthquake movie that’s small. It has to have some scale to it and therefore it should be a mainstream film. So that’s our plan.”

Although fans of Xtro’s awesome practical effects may be disappointed to hear they’ll be using digital motion capture to animate the alien this time.

However, they seem to have picked a truly promising actor for the part.

“A contortionist in Toronto, a guy called Troy James, he’s an amazing contortionist. From standing to being flat on the ground is like that [snaps fingers]. This man, his limbs and his joints must be made of jelly. Because he can move in ways that no one can move. He’s triple-jointed or something. So I was saying to [director] Harry [Davenport], this is the guy we have to get into motion capture and then we can make him a creature who will move unlike anything else that’s ever been created. Because it’s real and yet… He’s been in a couple of horror movies where he’s played creatures. The Void [is one].”

He also explained Xtro 4 will have some parallels with the original, implying it won’t be entirely different.

“By making the controller of the spaceship a creature, that’s one of the connections I wanted to make. And the leading character in the film is a 16-year-old girl, Jodie. The things that she goes through, although they’re not at all related to what Maryam d’Abo’s character went through in Xtro, there is a kind of resemblance as someone who is being overtaken by alien feelings and thoughts and influences and is forced to act against their own nature. Someone who has been altered. So in that way, it has a family resemblance, but it’s not very direct.”

It also sounds like they’ve taken inspiration from Species, as the aliens are tinkering with DNA to create some really interesting hybrids with humanity.

“The spaceship has been there since way before there were people. And it’s testing creatures. And one of the creatures it tests is this 8-year-old girl, Jodie. And that’s what changes her. You could say the aliens are playing around with the DNA of the creatures; they’re altering the DNA. So Jodie is altered. So, by the time she’s 16/17, she’s a very angry young girl. And she doesn’t know why. As things go on, she discovers that actually, without knowing it, she can do things like kill people without realizing she’s doing it. So she has these powers that she gains during this period. And then she eventually gets to the spaceship because they want her on board because they’ve altered her, and then the ending is remarkable.”

If that all doesn’t sound crazy enough, the aliens are literally trapping the Earth inside a giant metal barrier.

“[Xtro 4] takes place in the future but, like, tomorrow. It’s when this earthquake hits and everything turns into chaos. Teenagers in LA, their parents all have to figure out ‘How do we meet up now?’ Communication gets screwed up, transportation is gone, weird people come out — very weird people come out. At the same time, the aliens are emerging from the earth. They’ve built a kind of barrier around the earth, a metal barrier which is meant to keep everyone in. And everyone out.”

I honestly don’t think they could’ve made it sound better than this. Wow. As a huge fan of the original films, this Xtro 4 sounds like a perfect way to pay homage to the older films and expand the franchise into something truly refreshing. Hopefully they find a way to get it made soon, despite the massive budget they’ll need to complete it.