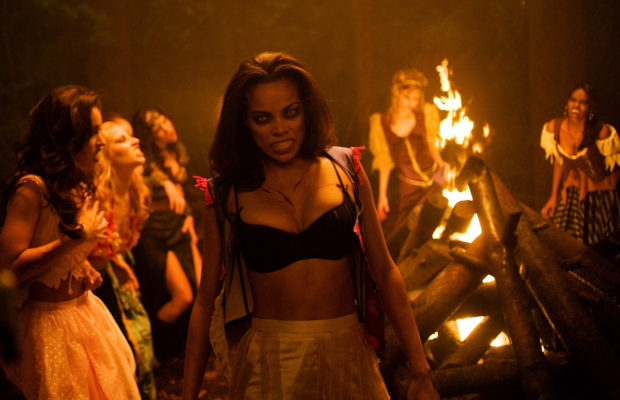 Marilyn Manson is easily one of the more iconic artists to be used in movie soundtracks these days. But there were plenty of horror films in the late 90’s and early 2000’s that helped push his name into the public mainstream. Here’s a look at ten awesome uses of his music in horror movies.

Although Spawn isn’t your traditional horror movie, the tropes and signs of the genre are clearly there. One of the elements that really brings out the viciousness of what would otherwise be a generic superhero movie is the soundtrack. While it’s undeniably 90’s in every sense of the phrase, Marilyn Manson’s music helps make it a little more tolerable. And the lyrics are certainly fitting.

Another example of a 90’s horror flick that’s heavily dated is Strangeland. Dee Snider of Twisted Sister fame stars as a serial killer who lures teenagers through the internet. While that could’ve easily been a dull and uninteresting movie, the soundtrack much like Spawn enhances the film’s flavor. Marilyn Manson’s music is used alongside bands like Megadeth and Dee Snider’s own Twisted Sister.

3. House on Haunted Hill – Sweet Dreams (Are Made of This)

Here’s a use of Marilyn Manson’s music that’s actually really well put together. His song Sweet Dreams bleeds through the visuals as eccentric millionaire Steven Price creates a guest list for his haunted house party. It’s also our first clue that a supernatural force is at work, so naturally the haunting tune of the music fits perfectly.

Originally Book of Shadows would’ve opened with Frank Sinatra’s song Witchcraft. Although the title of that song is a little more fitting, and would’ve been a unique change of pace for a post-Scream horror movie, I still enjoy Manson’s contribution. When you watch the overhead shot of the trees and Disposable Teens kicks in, you’re instantly invested in this world of deception and ghostly trickery.

Dracula 2000 is nowhere near a great film, and much like a few of these other movies might only be watchable for the soundtrack. But mixing Count Dracula with the dark, almost seductive sounds of Marilyn Manson is kind of fitting. Especially for the contemporary style they were going with.

Here’s a solid example of a slasher movie that tried to go back to basics after Scream satirized the genre. Although many could deem the effort too little too late, it did have a killer soundtrack. Plus a title theme by Marilyn Manson makes it even better. Whatever happened to giving horror movies their own theme songs like this anyways? Plenty of slasher movies from the 80’s got the treatment.

7. Queen of the Damned – Redeemer

Much like Dracula 2000, this is a movie that tried to mix early 2000’s rock and metal with vampire lore. Although I still agree with the idea they were going for, the execution falls a little flat. It’s almost like they were trying too hard at times. Nevertheless the soundtrack is still fantastic and Manson’s music as well as the other artists make it worth the watch.

While some of the sequels did get out of hand, the original Resident Evil is actually half-decent. Yes, some of the CGI is dated. And it’s terrible at following the video games’ storyline. But on its own, it’s a great little tribute to George Romero’s zombie films and Manson’s soundtrack is such a fantastic addition to what was at the time a tired genre. It really gave you the feeling that Resident Evil was something new and worth seeing.

Here’s a modern slasher movie that knew exactly how to pace itself. After the slightly suspenseful, somewhat comedic opening kill scenes, we get to hear Manson’s music take the front stage. The song leads us from Victor Crowley’s Honey Island Swamp all the way to New Orleans. Teenagers are partying, drinking, and Manson’s music is the perfect way to blend it all together.

Yes, I already listed a movie that uses Sweet Dreams. But Trick ‘r Treat uses it in a much more seductive, horrific fashion that it’s worth a second mention. Similar to Book of Shadows, this wasn’t originally going to be the song used in the movie. But I’m thankful it is, because personally, I think it delivers its own haunting surreal quality. It really helps enhance what I’d consider one of my favorite werewolf transformation sequences in the horror genre.

While Marilyn Manson’s music isn’t always used in the best of movies, they’re usually worth watching just because his music is in them. There’s a certain style to it that brings mixed feelings of ferociousness, seduction, and the horror of what’s to come.