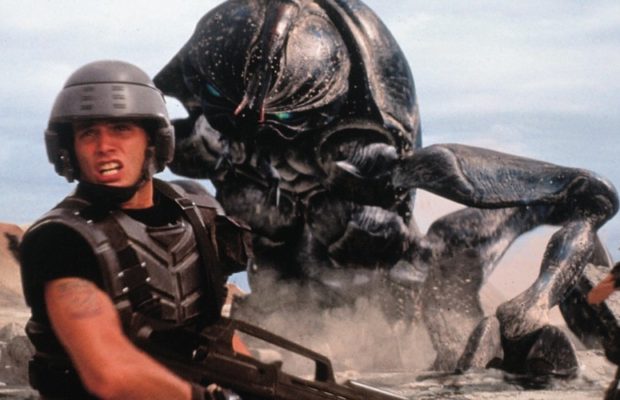 It looks like RoboCop isn’t the only thing writer Ed Neumeier is working on rebooting. He’s now revealed the possibility of a live-action Starship Troopers TV series with the original movie’s cast! Neumeier hinted at the idea during a recent interview with HN Entertainment, saying,

“Well, I think they can. I don’t want to jinx anything, but we are talking about trying to do a television show that is based on that idea.“

Unfortunately there isn’t anything much else going on with the show past basic conversations. It does lend plenty of hope to the idea, however, that we’ll see the original cast in a proper storytelling format. Now that Netflix is picking up properties like Resident Evil, why not take the chance at Starship Troopers?

Of course, the Starship Troopers series isn’t the only thing going on with the franchise. A few years ago there was talk of an official remake being passed around, one that Neumeier had a few skeptical thoughts about.

“Well, I have mixed feelings about it (the reboot) because I think that what we did with the first Starship is almost not repeatable in a way… I based the structure of Starship Troopers when I was writing it, the structure of WWII propaganda films that the studios made between 1941 and 1944. We don’t really talk about those movies anymore, but that had a very particular structure and they were made during a conflict and they didn’t have an end-point as with Starship ends they’ll keep fighting.”

So if we could get past the remake, it would be great as ever to see the original cast back. Especially with the way television has been expanding these days. It’d be a fantastic means to tell the story of the ever-lasting war against the bugs. So hopefully the remake gets thrown out of the way and we can expect to see the series become a more likely scenario.