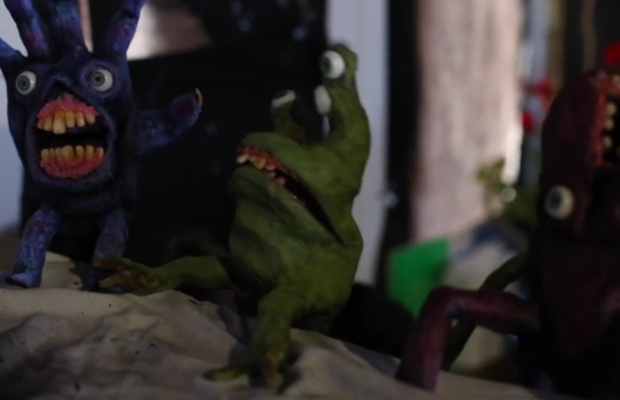 When I first heard about Slimoids, I was immediately excited. As I grew up and first found my passion for watching horror movies, one of the first genres that appealed to me was the little monster types of movies. You know the ones – Gremlins, Ghoulies, Critters, anything that clicked in my small child brain and said, “Hey, these tiny little monsters are pretty cool.”

Obviously it’s a genre that pretty much started and died in the 1980’s, save for a couple of obscure 90’s gems. That’s why Slimoids was such an anticipated project; I couldn’t wait to see all-new monsters and their crazy shenanigans.

Surprisingly, however, this is a movie that doesn’t quite feel the same as those genre flicks. It doesn’t have the silly partying monsters of Gremlins or Munchies. There isn’t a large emphasis on alien pests or bounty hunters like Critters. Actually, the biggest movie I could think of while watching, is one no one would suspect. A 1989 film from Barry J. Gillis simply titled Things.

Now I’m not just saying that because both films happen to be low-budget productions. The subject matter of either movie is truly similar. And not in a bad way. Both flicks feature disturbed mad scientists, their mutant creations, and eerily surreal atmospheres. But intriguingly the similarities end there.

While Things is your stereotypical cabin in the woods plot, Slimoids moves along incredibly well. There’s an opening scene that immediately catches your interest and forces you to watch. It demands our attention and the curiosity is too much to turn away from the screen. What are these monsters? Who is controlling them? These are questions we quickly begin to ask and find satisfactory answers for by the end.

Now I don’t want to give away too much, even though there’s not exactly any surprising twists or turns. But it’s definitely a movie you want to watch and enjoy from an unaware point of view. It’s a treat for any fan of old school b-movies who’d just want to sink their teeth into some slimy sludge and gore. And the third act definitely delivers on that – imagine if David Cronenberg directed Street Trash.

If you’re expecting Gremlins, you’re not going to want to watch this movie. But if you want to keep an open mind and embrace a fever dream of slime and feral mutant creatures, this is definitely a movie for you.