[Review] ‘Necropolis: Legion’ is a Slow-Burn Throwback to Classic Horror 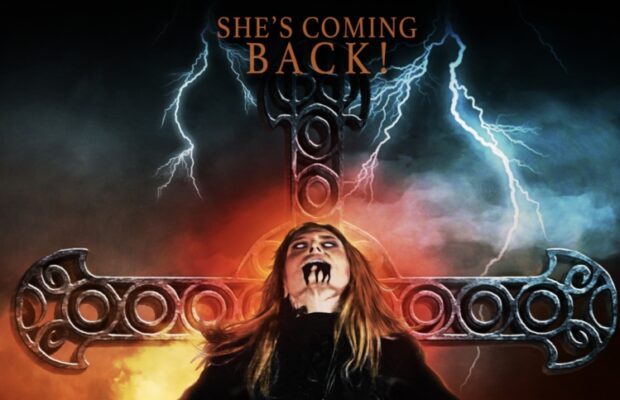 Necropolis: Legion opens with a prologue showing a pious reverend (Joseph Lopez) facing off against his wife, who is in fact a vampiric witch with monster-mouthed breasts named Eva (Ali Chappell). The sequence is colorful, bloody, theatrical and beautifully grandiose in its old-school gothic flavoring. It promises a pulpy horror-fantasy reminiscent of an E.C. or Warren horror comic book but with a European cult film aesthetic. The remarkable thing is how the rest of the film manages to live up to that style.

Lisa (Augie Duke, Bad Kids Go to Hell) is a paranormal writer touring with her new book while on her way to go do research for her next one at the old farm that used to belong to Maynard Gandy, the reverend from the prologue. Upon arriving there, director Chris Alexander’s style begins to shine through some more. Unlike the rather bombastic opening, Lisa’s time at the farm is somewhat languid and tranquil feeling, underlined by a growing sense of unrest. These sequences of her exploring her environment are punctuated by stylized nightmare sequences, which includes some really awesome shots of a bloodied up Eva stalking around a foggy cemetery which looked like if someone’s Hammer Films-inspired dream creation had wandered into a Universal Monsters flick. We also get one of the best reverse melting effects this writer has seen in a long time during this sequence, so big props to The Butcher Shop FX for their work there.

Chris Alexander’s direction here is notably different from what some may expect based on his other films. While there are still the stretches of tranquility and long takes, the film is more narratively conventional, though not in a bad way at all. He keeps things moody yet involving, eerie yet personal and atmospheric yet fun. He seems to have a good grasp on directing his performers and gets great work out of everyone involved, but it’s clear that his real talent is in creating atmospheric imagery for these performances to thrive in.

As far as the cast goes, Genre veteran Lynn Lowry (Shivers, Cat People) pops up in a supporting role as a more heroic witch. It’s the kind of role that requires some good manic energy and I’d say she delivers it here and offers an interesting enough force of positivity, even if her screen time is somewhat limited. Joseph Lopez also fits the archetype of the fearful reverend perfectly and leaves a really strong impression with little screen time. The film truly does belong to Augie Duke and Ali Chappell. Duke brings a physicality to her role that it really needed in order for it to work, while Chappell is a commanding enough presence to make the role of Eva memorable and intimidating. There were times where she felt like a hybrid of Stirba from Howling II and Christopher Lee’s Dracula, particularly from the later Hammer-era Dracula films like Dracula A.D. 1972 and The Satanic Rites of Dracula. It’s a combo that brought this writer a lot of joy.

The score by Richard Band is appropriately moody and organically plays along with the imagery it accompanies. It was very nice to hear a new Band score and I’m sure it goes without saying that it’ll be a highlight for a lot of longtime Full Moon fans.

t only a little over an hour long, Necropolis: Legion never overstays its welcome and delivers slow burn moodiness and macabre fun in equal measures. This isn’t a Full Moon movie in the way a lot of people would expect from them, but fans of old school cult cinema and Italian horror will find lots to love here. Personally speaking, I hope this isn’t the last we see of Eva.