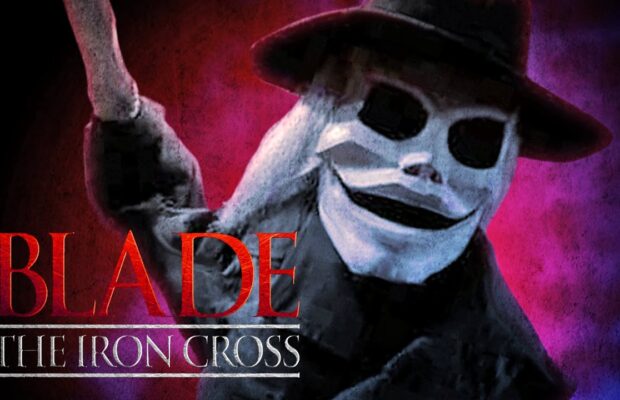 Puppet Master always has been an odd one. After eleven installments (thirteen if you count the non-canonical Puppet Master vs. Demonic Toys and the 2018 reboot Puppet Master: The Littlest Reich), it would be easy to dismiss the venerable direct-to-video horror series as being stale for the past few entries. Depicting the ongoing adventures of living puppets, the series has seen the puppets as villains, heroes and everything in between. In some ways, you could draw parallels to the even more extensive Godzilla franchise in terms of how versatile its characters have proven to be. For the last three installments, we’ve found ourselves in WWII-era America with the puppets thwarting Nazi bad guy after Nazi bad guy, all who want to secure the secret of their lifeforce to create a zombie army. In Full Moon’s first attempt at a spin-off focusing on just one of these murderous marionettes, Blade: The Iron Cross doesn’t offer new in terms of narrative zest, but it more than delivers on the weirdness to make up for it.

Elisa Ivanoff (Tania Fox, Art of the Dead), a young psychic woman with a peculiar attachment to the titular diminutive hook-and-knife handed fiend, finds herself suffering from dreams foretelling a catastrophe at the hands of the maniacal Doctor Hauser (Roy Abrahmsohn, Escape from Tomorrow), a Nazi scientist who is working on a form of bioenergy that can create an army of subservient undead.

As I mentioned above, the plot isn’t very special as far as entries in this series go. The main difference is that instead of a few puppets, we just get one and even then there isn’t much focus put on his. This is totally Tania Fox’s show and she luckily has sufficient presence and likability to carry it. The supporting cast isn’t the strongest, but Abrahmsohn manages to chew up some scenery and give some life to his one-dimensional antagonist. What ultimately saves the film from slipping into total mediocrity is director John LeChago’s clear love for just being totally nutzoid. Being a fan of his 2010 body horror romp BioSlime, I was very pleased to see that same borderline-fetishtic love for weird imagery and affection for putting whatever he thinks looks cool over whatever makes logical sense. It’s the kind of panache I feel every genre director needs to have when approaching a film like this.

The effects work often lets him down, with Blade being an unfortunately lifeless puppet or veteran creature performer Alan Maxson (Godzilla: King of the Monsters) in a costume. But it’s balanced out by some solid gore gags and solid production design. The always reliable Richard Band’s score helps liven things up quite a bit as well.

At the end of the day, Blade: The Iron Cross will only appeal to committed fans of the series and even then I expect it to be fairly divisive. As for this reviewer though, I rather enjoyed LeChago’s briskly paced hodgepodge of old school sci-fi and strange pseudo-horror. If future installments follow this tone, then I’ll be very happy for Full Moon to make them for even more years to come.