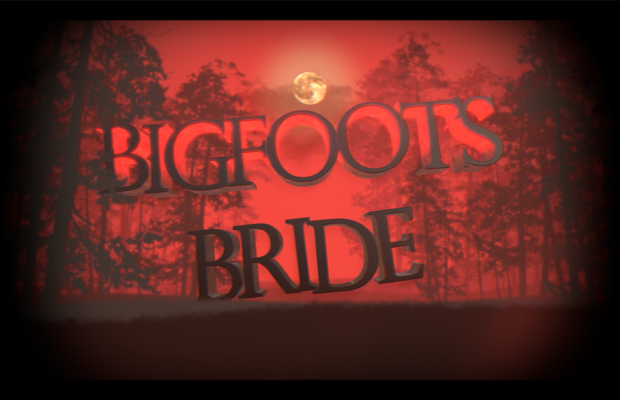 Bigfoot’s Bride is writer/director Erick Wofford’s feature debut. As such, one cannot expect perfection. There’s much to be said about the difficulty of making any film, let alone your first one and without any semblance of a budget, so I’ll just get it out in the open now: If you’re expecting anything more than a micro-budget monster movie shot on the thinnest of shoestring budgets, then don’t bother seeking this one out. This is strictly for the most ardent fans of DIY genre filmmaking.

The plot, as light on it as the film is, concerns a monster out in the woods and its day-to-day struggles with meeting women, killing men and just trying to find a place for itself in this crazy world. That’s about it, really. It has an odd slice-of-life feel to it that can be pretty jarring for something that was pitched as being a throwback to Corman-era creature features.

The paper-thin quality of the plot didn’t bother movie as I typically like movies that put more focus on either character interactions (whether it be with other characters or the environment around them), but the tone was very frustrating. It varies from campy to melancholy without much tact. I enjoy tonal variance in movies, but only if the films can totally commit to every single one it presents. I also can’t say I was fond of its “retro” aesthetic. Sometimes it’s meant to look like an old VHS copy of the movie and other times like a beat up film print. I think the film would have had a lot more strength if it had played it more straight, maybe lean even more into the languid nature of following this monster along in its day-to-day existence.

Where the movie excelled for me was in its effects work. The use of animated blood (2D animation, not cheap faux-CG plug-ins) made the kill scenes amusingly quirky and there were some really effective moments of low-budget gore. The “Bigfoot” itself is something to behold as well…Erick Wofford asked that I do not give away any details regarding the monster’s appearance and I will respect his wishes, but let me promise you that you have never seen a Bigfoot like this before. It made this old-school monster fan very happy.

At the end of the day, Wofford did what he could with what he had. He wanted to make his own low-budget creature feature and he went out and did it. It’s far from perfect, I’m not even sure if I’d say I liked it, but I do love that there are people out there in the indie scene trying to make stuff that they want to see. Bigfoot’s Bride isn’t a masterpiece of independent filmmaking, but I believe that the fact that it exists is something to smile about.