[Review] ‘Art of the Dead’ Delivers As a Satisfying B-Movie 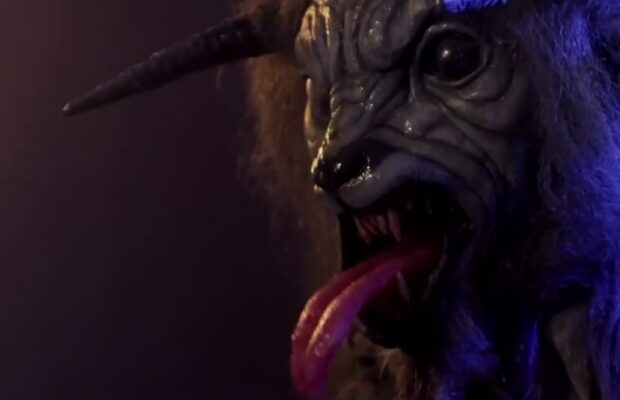 Rolfe Kanefsky has made quite the name for himself in the world of independent horror. His first feature There’s Nothing Out There recently received a stunning blu-ray release from Vinegar Syndrome and after a couple years away from the genre, he’s been cranking out a series of wonderfully enjoyable B-movies including the gory Satanic horror-comedy Bus Party to Hell and the wonderfully slimy and strangely erotic horror flick The Black Room. The former was done in collaboration with the Mahal Brothers, who have been making a pretty big mark on the world of B-horror as well, regularly cranking entertaining genre cinema with production values that are on par with most mainstream direct to video (or I suppose it would be direct to streaming nowadays) films. Their most recent collaboration is Art of the Dead, which succeeds at delivering everything Kanefsky has established himself at being capable of delivering.

Art of the Dead tells the story of a couple (Jessica Morris and Lukas Hassel) who buys a series of paintings representing the Seven Deadly Sins, each one having been painted by a murderous artist (Danny Tesla) after he made a Faustian bargain with the Devil. The artist’s name is Dorian Wilde, in case things were a bit too subtle so far. The paintings begin to affect the couple and their family in increasingly disturbing ways, leading to an enjoyably bonkers finale.

Kanefsky’s direction is energetic, even though the flat TV-movie lighting sometimes betrays that energy. Luckily, his love for the genre is apparent and so he keeps things interesting with the same mix of humor, gore, monsters and bizarre sexuality that he displayed so well in The Black Room.

The performances range from acceptable to remarkable. Robert Donovan (Trancers 6) brings gravitas to the role of a tortured priest who tries to save the family, while Morris and Hassel display great chemistry as the lead. Most wonderful is Richard Grieco (21 Jump Street, A Night at the Roxbury) in a brief but memorable role as the previous doomed owner of the cursed paintings. On the weaker side, we have Tara Reid (The Big Lebowski, Sharknado) in a thankfully small role as an art gallery owner. Reid has never been the strongest onscreen presence and the role simply does her no favors.

Also of note are the effects by veteran artist Vincent J. Guastini who delivers a nice variety of goopy effects and cool creatures to satiate anyone craving some old school effects in the same vein of the sort of stuff that Brian Yuzna would’ve produced or directed in the 80’s and 90’s.

While Art of the Dead may not win over any new fans to the genre, it’s a fast-paced and professionally made film that delivers all that it promises and never allows one second of its runtime to go to waste. Well worth seeking out.