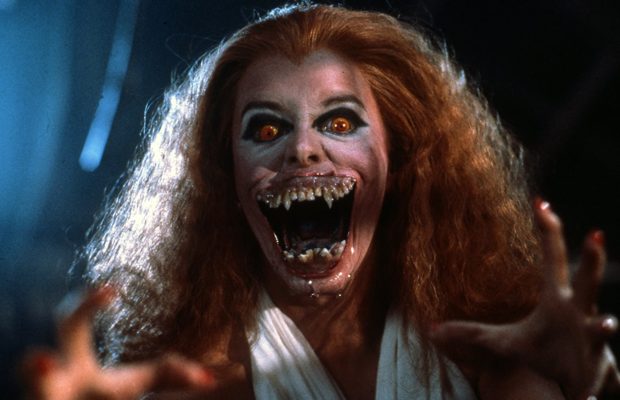 There are very few vampire movies out there like the original Fright Night. Child’s Play director Tom Holland directed the film in 1985, creating a piece that pays tribute not just to Hammer’s library of Dracula and vampire flicks but horror in general. It’s since gone on to be a modern classic with fans, spawning a sequel and two remakes. But somehow it hasn’t had a proper Blu-ray release – until now.

Sony is officially releasing Fright Night on Blu-ray in the US, the first time since Twilight Time released a limited edition run of the flick in 2015. While those copies and a variety of other-region releases still exist, it’ll be nice to see Fright Night given a mainstream retail release in the US.

Hopefully this means in 2019 we get to see more out of print films make a comeback. We already got to start the year off with a Trilogy of Terror II announcement. And while there’s still plenty of other movies that Sony themselves need to release, I’m hoping Richard Rubinstein takes note and finally gets the original Dawn of the Dead back in print.

Meanwhile, if you haven’t seen Fright Night, I highly suggest you check it out. The movie is easily my favorite vampire film and I’m almost ashamed I haven’t reviewed it yet. I’ve been collecting all the other films and comics just because of how much I love that first movie.

There’s truly something special that comes together with the cast, special effects, and gorgeous soundtrack that should lend to a fantastic new Blu-ray experience.

You can access the Amazon listing for the new Blu-ray release from the image below; where you’ll be able to see the February 12, 2019 release date.

I'm the creator of Brain Mutant. I'm not being controlled by an alien parasite in any way. I swear.
Related ItemsBlu-rayFeaturedFright NightTicker
← Previous Story ‘Trilogy of Terror II’ is Being Remastered for Blu-ray
Next Story → Amanda Ripley is Returning to ‘ALIEN’ Franchise in a Big Way