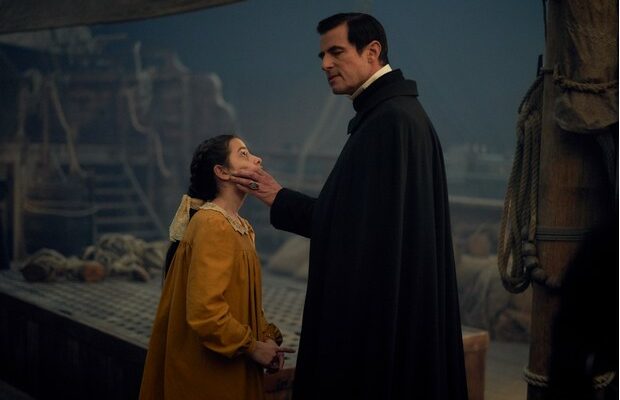 New stills have been released from the upcoming BBC/Netflix co-production of DRACULA. The stills depict our titular vampire at the mercy of some nuns and on board the Demeter, the doomed ship which brings him from Transylvania to England in the novel. Based on these images and the new characters featured in them, which you can see down below, it’s safe to say that the Demeter will play a major part in this new series, which was created by Mark Gatiss and Steven Moffat.

Claes Bang (The Girl in the Spider’s Web) stars as the infamous Count Dracula in what appears to be a very loose adaptation of the classic Bram Stoker novel. Characters from the book seem to be absent and elements from John Polidori’s The Vampyre seem to have been incorporated in the form of Lord Rutheven, a character from that lesser known novel.

The three-part series is set to air in the UK on January 1, 2, and 3 with a forthcoming Netflix release which has yet to be announced. The three episodes are directed by Jonny Campbell (Westworld), Damon Thomas (Penny Dreadful) and Paul McGuigan (Victor Frankenstein) respectively.

The series seems to be quite bloody and heavy on the classic gothic atmosphere that we all associated with the character. As an added bonus for classic horror fans, the majority of the series was shot at Bray Studios where a number of classic Hammer films were shot.

“In Transylvania in 1897, the blood drinking Count is drawing his plans against Victorian London.”

We will be sure to follow up on this Dracula series as more information is released. In the mean time, enjoy the new stills!

What do you think of the new images? Are you excited to check out the new Dracula series from the BBC and Netflix? Let us know your thoughts in the comments section down below!

Related ItemsBBCDraculaFeaturedNetflixTicker
← Previous Story First Trailer Released for ‘Blood Rites of the Vampyr’
Next Story → Exclusive: Interviews With The Director And Star Of ‘Blade: The Iron Cross’