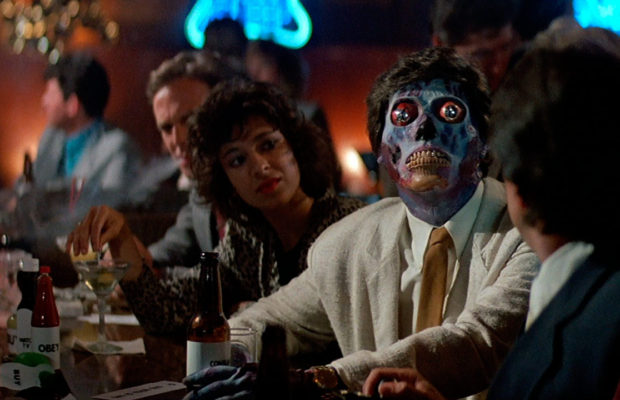 John Carpenter’s filmography seems to never cease getting sequels or reboots in some fashion. While the release of Halloween’s latest sequel is just around the corner, it’s not the only Carpenter-related sequel being talked about. We also know there’s some kind of Big Trouble in Little China sequel in the works, as well as potential new projects including Prince of Darkness and Starman. But They Live is the latest film going through the motions, as John Carpenter himself has teased something is happening.

While speaking with Den of Geek, Carpenter was asked about the possibility of They Live getting some kind of reboot. He explained that something is potentially in the works.

“Well, I’m not gonna tell you about that, because it might be closer to reality than you think.”

The interviewer then asked about the remake which was being talked about a few years ago, to which Carpenter replied:

“There was a feature film. It was a feature film called Resistance, written by, oh, the guy who did the Apes movies. Matt Reeves. But then he moved on. And so the sequel is, well, we’ll see. We’ll just have to see.”

He even gave a few new details on the possible Prince of Darkness series that was brought up recently.

“I might have done that, huh? You heard it from me. It’s not a lie, but it’s not ready to go yet, so rather than discuss it, I think I won’t.”

Hopefully some of these projects do happen, and with more creative involvement from Carpenter. The biggest wish I have though is that we get a new Escape From New York continuation with an older and more grizzled Snake Plissken once more played by Kurt Russell. How sweet would that be?

Of course, They Live has a lot of sequel potential too. And in 2018, with the internet among other things, there’s plenty of new ways to explore the ideas of subliminal messaging and secret alien organizations. It’s just a matter of finding someone who could be just as good a protagonist as Roddy Piper.