Home / News / Exclusive: Interviews With The Director And Star Of ‘Blade: The Iron Cross’

Exclusive: Interviews With The Director And Star Of ‘Blade: The Iron Cross’ 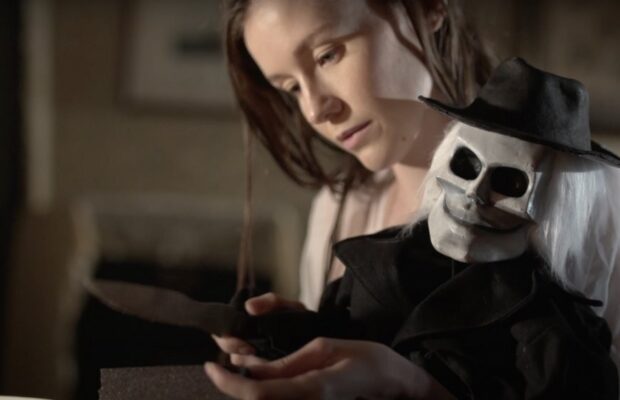 John LeChago is no stranger to Full Moon, having directed the last three films in the Killjoy franchise. However, Blade: The Iron Cross marks his first entry as a director in the Puppet Master world. Read the interviews below and enjoy some of the insider info he was able to offer on Blade: The Iron Cross.

Puppet Master is Full Moon’s crowning achievement as far as their major franchises go. Did you feel more pressure going into this film than you did on the Killjoy sequels?

John LeChago: I did not feel more pressure with BLADE the Iron Cross, but I always feel a tremendous amount of pressure with any movie I direct. To me, the success of Killjoy was just as important because it is a collective artistic endeavor. A movie is a collaborative entity, so its success affects many people, not just the director. I feel the burden for the cast and crew with every film. Yes, a Puppet Master movie may have more of an impact on Full Moon’s reputation, but I am confident because I try the best that I can with what I have to work with. I give my all every time.

Did you go to Charles Band with the idea of directing this one or did he approach you for it?

John LeChago: Charles Band originally offered me two other movies from the Deadly Ten slate, which I appreciate very much, but I jumped on BLADE the Iron Cross because I definitely had ideas about the character. BLADE is a very mysterious and complex character and I wanted to explore him a little more.

How much involvement did you have with crafting the story for this one?

John LeChago: Charles Band had a definite idea of what direction he wanted to go in and he involved Brockton McKinney who is developing Full Moon stories for the comic books. Brockton made a couple of pitches and then we collaborated with Neal Marshal Stevens (writing as Roger Barron). There was definitely a list of ideas that I wanted to be included and the writers successfully integrated them.

2018 saw the release of Puppet Master: The Littlest Reich, in which the puppets themselves are reimagined as Nazis instead of Nazi killers. Did you feel any sense of satisfaction getting Blade back to his role as a hero?

John LeChago: I would not call it satisfaction because The Littlest Reich was a divergent production that took the characters into a different reality. For me the essence of the character never had to be reset; we just were given the opportunity to explore it in-depth.

There’s a lot of focus on Elisa’s connection with Blade, which makes this the first Puppet Master movie to have a very heavy female focus. Was that intentional or did it just make the most amount of sense for Elisa to take the reigns as the hero this time?

John LeChago: Right on both points! I love female lead characters and I definitely wanted her to be more active than in her last film. I thought it would be great to have her use her powers to directly influence BLADE somewhat like what her father did in “Axis Termination”.

Roy Abramsohn is a ton of fun as Hauser. What was it like working with him?

John LeChago: Yes, Roy is a ton of fun and very pleasant guy. I met him on the set of Weedjies in Las Vegas. He was playing a comedic character and I always thought that nice funny people make the best bad guys. I urged him to audition for the role and he kicked ass.

Making a period piece on a low budget is never an easy task. What element of this proved to be the most challenging for you?

John LeChago: Do you know how hard it is to find vintage typewriters? Dang, they’re expensive to rent as well! It usually isn’t a problem to get one vintage typewriter for a scene, but we had to create a 1940s newspaper bullpen. We rented a couple and then I just spray painted a couple of trashed typewriters from the 1960s to put in the background. Otherwise, it wasn’t too bad because we had Billy Jett who has been creating period piece production design for Full Moon since Puppet Master III. It was a wonderful experience to finally work with him! My only regret is not being able to shoot a street scene with period-correct police cars, but that is part of the limitations in our case.

Puppet Master is a series that will probably go on for as long as there’s a Full Moon. Do you have any ideas for where you’d like to take the story next if you were to direct a follow-up?

John LeChago: In this case, you would have to ask Charles Band. He is the “Puppet Master” and directs where the series goes. If Charles Band asks me to, I would happily take the challenge of continuing the story. Of course, I have a reputation (with Killjoy) of wanting to take storylines into unforeseen territories.

Which other puppets would you like to see get their own spinoffs?

John LeChago: The other puppets are tougher than BLADE because their origins are more straightforward. But the puppet that would be most fun would be Six-Shooter. He would need to have an epic shootout inspired by such films as “Taxi Driver” and “The Wild Bunch”.

Finally… What’s your personal favorite Puppet Master movie and why?

John LeChago: My favorite Puppet Master movie is “Puppet Master III: Toulon’s Revenge”. It is where the series really found its stride and tone, and it was the beginning of the storyline that we are expanding upon now. “Puppet Master III” has BLADE’s origin and really identifies the major conflicts.

And that sums up our time with the first of these Full Moon interviews, the first section of which just featured Blade: The Iron Cross director John LeChago. The next section of our Blade: The Iron Cross interviews focuses on actress Tania Fox, who reprises her role as the psychic Elisa Ivanov from Puppet Master: Axis Termination, albeit this time in a more leading capacity.

First off, I just want to say you did a really great job in this one. What was it like getting to return to the role after Axis Termination?

Thank you! It was wonderful! I thoroughly enjoyed working with the Full Moon team and I have a lot of love for Elisa Ivanov. Getting to portray her once more and to show how much she has grown was a great experience. What made it even better is that the script for Blade was very well written and exciting and I couldn’t ask for better cast and crew.

In Axis Termination, Elisa was very much a component in a group dynamic of heroes, whereas here she more or less stands alone as the main character. Did that affect your approach to the character in any way?

In a way it has. My main goal was to show how Elisa has grown into a young woman who can now stand up for herself and hold her own. In Axis Termination she still had her childlike naivety and was dependent on her father and his approval. In Blade she has no one to depend on but herself. And Blade of course though she doesn’t know it right away. She has matured and her powers have grown. She has become someone who is dangerous to underestimate, and I loved that journey for her. My job was to keep her true to herself, the kind loyal thoughtful girl she is, and yet to show that she is fully capable of making calculated choices and defending herself and those she loves.

Do you have any prior attachment to the Puppet Master series? Were you familiar with the franchise before being cast in Axis Termination?

Unfortunately, I didn’t grow up with Puppet Master, but I watched all the movies and more of the Full Moon’s work upon being submitted to audition for Axis Termination and I very much enjoyed them.

Elisa’s connection with Blade is a major component of the film. Did you find it difficult having to convey that relationship while shooting?

I personally felt like I had a connection with Blade since filming Axis Termination because he was the only puppet to end up in my hands multiple times during the shoot. That’s why it made sense for me to be in Blade the Iron Cross. Conveying things like Elisa’s connection with Blade is not particularly difficult though requires some skills in physical acting. With John Lechago’s direction my job there was fairly easy.

You pull off some great moments of physicality in some of the scenes where you’re dreaming or controlling Blade. Do you have a background in dance or any other art forms where you need to convey a lot without speaking?

Thank you. I have some background in dance as well as gymnastics. But most importantly I have a lot of training in the realm of acting including basic stunt and stage combat training which certainly was useful for these particular scenes.

Which other puppet would you like to see Elisa team up with in other spin-offs?

I, as Elisa, have a lot of love for Pinhead for attempting to protect Elisa from Doctor Gerne Ernst in Axis Termination risking his own life. I would love to see him back.

And finally…Where would you like to see the character go from here if she were to return in a follow-up?

I would love for Elisa to return once more. Taking in account where the things were left off at the end of Blade, I would say I’d like Elisa and Joe accompanied by Blade and maybe a few other puppets to go onto an avenger-like mission of kicking Nazi asses and taking names. It would be very interesting to see how their relationship develops and to see Elisa’s powers grow even more. Who knows maybe she could even learn telekinesis and actually aid in battles!

These two sections conclude our interviews with John LeChago and Tania Fox, the director and star of Full Moon’s latest entry in the Puppet Master franchise, Blade: The Iron Cross. The film is currently available to view on Full Moon Features’ streaming platform, Full Moon Streaming!