Home / Blog / [Digging Up] ‘The Evil Dead’ and its Lovecraftian World

[Digging Up] ‘The Evil Dead’ and its Lovecraftian World 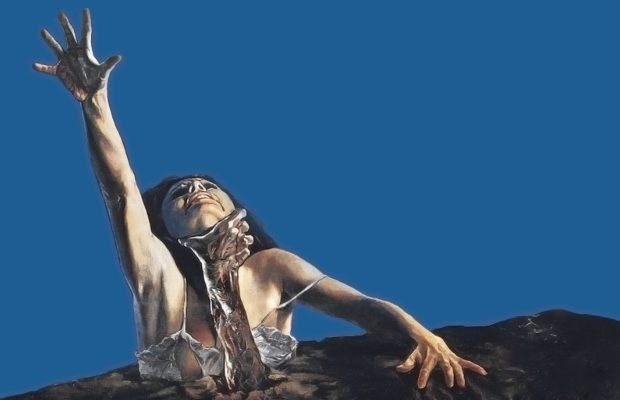 Digging Up is a series that will pay tribute to iconic or obscure horror films from the past. The movies featured in these articles are always going to have something special about them; something that makes them hold up even today. Whether or not they’re part of mainstream pop culture or have a dedicated set of cult fans – there’s always a reason to look back at them.

HP Lovecraft inspired a tremendous amount of authors and filmmakers with his iconic writings. While his legacy wouldn’t take off until after his premature death, his imagery of fierce monsters and spiraling into madness has lasted indefinitely. One piece of work that took this inspiration and made it into its own is now one of the greatest horror features of the 1980’s. It’s a small independent movie from director Sam Raimi titled The Evil Dead.

You’ve likely already heard of it. After decades of popularity, the franchise it spawned has become effortlessly integrated into our pop culture. But it wasn’t always such a mainstream success. In fact, the original Evil Dead was one of the most controversial films of its time. There wasn’t any emphasis on comedy or being backed by a big Hollywood studio like the 2013 remake. This movie was made by a small group of friends working tirelessly for several years to try and get this flick off the ground.

The first incarnation of The Evil Dead was a small short film titled Within the Woods. It was designed with a singular purpose – acquiring the funding necessary to make a bigger picture. While there are some similarities with the final product, they’re ultimately two very different types of movies.

Within the Woods focuses on the inclusion of a Native American burial ground, while The Evil Dead adopted one of Lovecraft’s most famous devices – the Necronomicon. The book was vaguely described in Lovecraft’s works, like most supernatural items or creatures. But Sam Raimi specifically gave the book an iconic design that’s lasted for decades.

To quote the description from the film itself, famously recorded on an old tape player,

“I believe I have made a significant find in the Kandarian ruins, a volume of ancient Sumarian burial practices and funerary incantations. It is entitled “Naturum De Montum”, roughly translated: Book of the Dead. The book is bound in human flesh and inked in human blood. It deals with demons and demon resurrection and those forces which roam the forest and dark bowers of Man’s domain. The first few pages warn that these enduring creatures may lie dormant but are never truly dead. They may be recalled to active life through the incantations presented in this book. It is through the recitation of these passages that the demons are given license to possess the living.”

The word “Necronomicon” wasn’t used until Evil Dead 2, when the name was changed entirely to Necronomicon: Ex-Mortis. But nevertheless, it’s clearly one of many lovecraftian influences from the original film.

You needn’t look any further than the opening scenes, where the camera slowly crawls through a foggy swamp. It passes by an abandoned car sinking into the muck. The camera then hovers over a series of branches just to try and get a closer look at our innocent, clueless protagonists. The opening is a truly eerie way to start a film and instantly insists something ancient and evil is lurking within the woods.

Because of this the camera is a wonderful way for Raimi to emulate Lovecraft’s vague descriptions of monsters. What could be chasing these people through the woods? Will looking at it drive you insane? There’s something really wonderful and scary about that thought.

While The Evil Dead or its sequels aren’t direct adaptations of Lovecraft’s work, they do a fantastic job at paying tribute to it. Whether it’s in the subtle camera angles or grotesque book made of human flesh, there’s always something horrific going on in the world of The Evil Dead.