[Review] The ‘Chilling Adventures of Sabrina’ is Captivatingly Evil 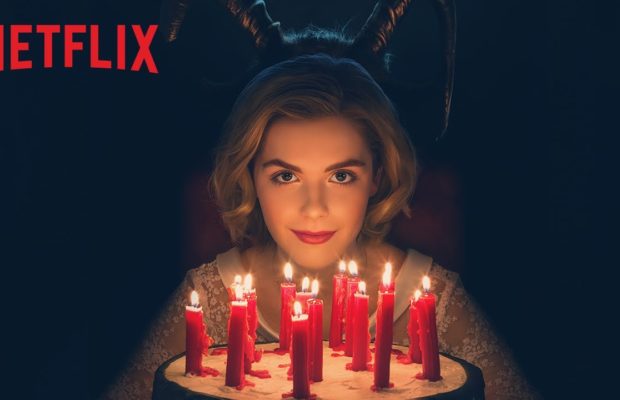 The Chilling Adventures of Sabrina effectively functions as an homage to classic horror while adapting the source material to the modern age with pristine execution. In this spoiler free review, I’ll tell you exactly what I liked, and didn’t like about Sabrina’s adventures.

This show has a lot going on, and it’s so easy to get lost in the town of Greendale, where every day is like Halloween. It’s not the most realistic of horror, it’s got some real camp to it. I think it adds a nice sheen to help smooth out the edge factor of all the blood and gore. Not to say that blood and gore aren’t welcome, that is. It adds some much-needed charm to hear Sabrina react to entrails nailed to her front door with an exasperated “Oh man!”

Multifaceted, if it doesn’t get you with the horror, it’s also got a wide cast of interesting characters of which there are many. The Spellman family manages to blend macabre comedy with plenty of kindness and genuine care for one another to go around. Sabrina’s inner circle of mortal friends feel genuine, all of them have believable goals and aspirations.

What’s more, the characters are allowed to develop off-screen. We’re not shown every detail of a person’s development, and it never feels like Sabrina is directing everything. The characters here talk, collude, and go through things on their own. We don’t need to witness every character being broken down and rebuilt to acknowledge that they’re dynamic, they just are. We’re never shown enough of the characters to get sick of them, either. It allows us to enjoy them while they’re onscreen but also keeps us refreshed as the characters change through the season.

Not everything is perfect, and the Chilling Adventures of Sabrina is no exception. One major gripe I had with the show throughout the show usually involves romance. The relationship between Sabrina and Harvey can be a bit angsty. But that’s not really of any consequence, Sabrina is sixteen, and it’s okay for her to act sixteen. But her cousin Ambrose Spellman is not sixteen, and his interactions with Luke Chalfant are an issue.

To be blunt, this romance isn’t good enough. Their relationship is extremely contrived. From the get-go, these characters have no chemistry beyond attraction to one another. It’s rushed, and it de-legitimizes Ambrose’s character as it portrays him as hypocritical with regards to how he reacts to pretty much anything Sabrina suggests.

Even if we can’t be sure of both Ambrose or Luke’s intentions, it runs the risk of using shallow femme fatale tropes if he turns out to be an enemy. If he isn’t, then their relationship comes off as empty and adds nothing to the story. Part Two definitely has some explaining to do, because things don’t look good.

The show doesn’t fumble the LGBT ball in other parks, though. Suzie in particular, I found to be extremely satisfying to watch on-screen. Suzie isn’t defined by others acting on her, and her independence makes her growth as a character feel natural as she starts her transition.

Overall, I enjoyed it very much. It’s a wonderful blend of horror, comedy, and drama. Even when everything feels dire, Sabrina manages to keep it feeling lighthearted and positive.