Home / Blog / Why Ash vs Evil Dead Has a Great Ending

Why Ash vs Evil Dead Has a Great Ending 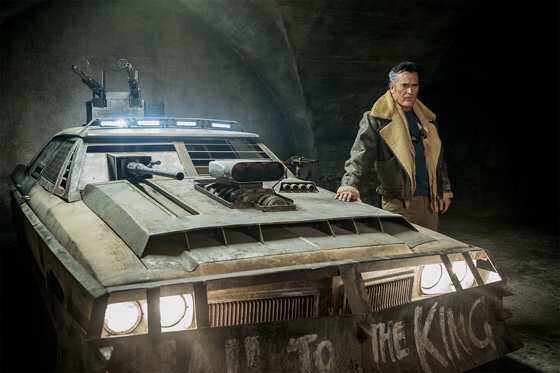 The Evil Dead franchise is notorious for its open endings and cliffhangers. Thankfully, however, these endings were eventually followed up by sequels which included the recently-canceled TV series. What makes the ending for the series different, however, is the fact the show was canceled prematurely.

While that shouldn’t be a problem for a franchise as expansive as Evil Dead, it seems Bruce Campbell (who portrays the titular Ash Williams of the franchise) no longer wants the job. He’s concluded that with the TV series being over, he has no intention to return for any other movies or shows. This means the TV series really does mark the end of the franchise’s original continuity. And that’s what makes the final episode so important.

Interestingly, the last episode for the show’s third season does feel like a series finale. There’s a lot of emotion shown by Ash, and the way he speaks to his friends and family by the end really makes it seem like their final goodbye. Of course the series was intended for another two seasons – but it seems like they wrapped up most of the major plots well.

The only thing is the very ending of the episode. After Ash defeats Kandar the Destroyer, a giant Kandarian demon, he’s knocked unconscious. One would assume his sacrifice would save the earth once and for all from the impending apocalypse. But that’s not the case.

Ash awakens from some type of sleeping chamber. He discovers his robot hand was replaced with a more advanced, lifelike prosthetic. As he wanders into the rest of the facility, he’s greeted by a rather attractive female who appears to be at least part robot.

She shows Ash what lies outside the facility – a desert wasteland the likes of which Mad Max could only dream of. In fact, it’s a rather nice use of an old idea for Army of Darkness. The original ending for that third Evil Dead film would’ve been to see Ash awaken in a dystopian wasteland. Now we finally have it.

For one reason or another, fans everywhere have called this a terrible cliffhanger. I beg to differ. While it would have led into an amazing new era for Evil Dead, I appreciate the simplicity of it. The open ending actually falls in line with the original movies, but with one difference. There’s hope.

In the original Army of Darkness ending, we discover Ash is completely alone. He has no one to help him through his journey. It’s just more devastation to add to his horrible night at the cabin.

But in this finale, he’s given a companion to aid him through the wasteland. His hand has been improved. And best of all, he’s got his trusty Oldsmobile with him. Of course, the classic car was upgraded as well – with an awesome Mad Max theme and painted letters on the front that spell out: Hail to the King. It’s beautiful.

The robotic companion even implies that Ash’s friends and daughter could still be alive. It gives Ash a reason to keep going and continue fighting. And why shouldn’t he? After all, the Dark Ones are still on the loose, and they’re the reason he’s in this mess in the first place.

As you can see, the ending simply makes sense when you relate it to other Evil Dead endings. And we do have one difference, which marks the finality of it all. Ash has hope. Our hero will get to ride off into the sunset, ready to fight Evil once again. We might not be able to see it, but it’s left to our imagination – and that’s the beauty of this finale.

While I would love to see Bruce Campbell return for one last and conclusive film, I appreciate what he and the other creators of Ash vs Evil Dead have given us. We learned more about our favorite hero than we ever thought possible. Who would’ve thought after Army of Darkness we would seen Lee Majors portray Ash’s dad? Or see Ellen Sandweiss reprise her role as Cheryl?

The series has been a treat for fans, and I’d go as far as to call it icing on the cake. And we know now that Ash is still doing what he does best, fighting deadites – whether it’s in the future or otherwise. As such, I’ve come to terms with the ending. After all, if Ash feels groovy, all of us should too.